This week we have a New Moon in Taurus, an asteroid (Ceres) changing signs, a planet (Pluto) changing direction, and a handful of hard (square) aspects between personal and transpersonal planets.

There’s an exact Moon / Jupiter sextile (in Pisces and Capricorn) as we start things off on Monday. Although this is a relatively fleeting aspect — the Moon goes void of course immediately afterwards and then remains thus until it moves into Aries around 7am — it’s still a nice way to start the week.

That Aries Moon is also relatively mild, with a sextile to Saturn in Aquarius as its main aspect during the day. Between these two aspects Monday is likely to be relatively uneventful, outside of the transits that each of us might be experiencing in our own natal charts.

The Sun squares Saturn and sextiles the North Node on Tuesday. The square to Saturn can be somewhat sobering and can leave you feeling somewhat pensive or melancholy. You might not have a lot of energy and feel like staying close to home. This is actually recommended, given the current global crisis.

The sextile to the North Node (which simultaneously trines the South Node) is generally a more social transit. It can bring people into your world that you’re working through past-life karma with (South Node) or creating new karma with (North Node). Of course these are often one and the same.

Pay attention to new people coming in during this time, even when your interactions are other than face to face. The sextile and trine are harmonious aspects that should make for pleasant interactions with others, as well as opportunities to work together. 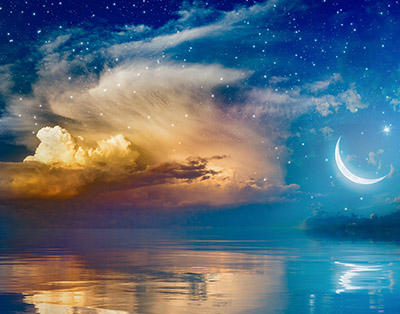 We have a New Moon at 3° Taurus 24 on Thursday. This New Moon takes place at 2:25 am UT (or 10:25 on Wednesday EDT), and closely squares Saturn while applying to a conjunction with Uranus.

New Moons bring opportunities to plant seeds that we can then coax to maturity over the duration of the (28-day) lunar cycle. This marks a time during which the focus should be on exploring the many possibilities before you.

This New Moon emphasizes opportunities for relaxing, meditating and getting grounded. These are all Taurus Moon activities, with the idea of comfort, luxury, and getting in touch with nature and the earth being the corresponding theme.

The Taurus Moon is sensuous and indulgent, so if you feel like getting something done, it’s good for more than just lounging around the house. It’s good for putting your culinary skills to use, remodeling your home, gardening or landscaping, or anything that amounts to creating beauty in your environment.

Because this New Moon is closely squaring Saturn and applying to a conjunction with Uranus, there are indications of conflict and strife. On the lower vibration, this signature can manifest as the masses responding to feeling oppressed (Saturn) by rebelling and rising up against the establishment (Uranus). But it doesn’t have to be that way. The Sabian Symbol for this degree of Taurus is “the pot of gold at the end of the rainbow,” which is a much more preferable image.

Also on Thursday, the asteroid Ceres leaves Aquarius and moves into Pisces. As Ceres is associated with mothering, nurturing, femininity and fertility (as the Roman counterpart to the Greek goddess Demeter), this shift implies a

As the Aquarius archetype is all about honoring and celebrating our differences, the Pisces archetype is all about seeing how we’re all the same. It’s about seeing how we are all in this together, and caring for one another translates to caring for ourselves. In the meantime we might be taking a closer look at our own great mother (the mother Earth) and figuring out how to take better care of her.

Mercury squares Pluto on Saturday, just as Pluto goes stationary retrograde. The Mercury / Pluto aspect is associated with intrusive thoughts, anxieties and fears. It can feel like your mind is playing tricks on you, convincing you that something is real based on rudimentary “facts.” You want to be careful not to let your imagination run away with you, lest you find yourself growing increasingly paranoid. This transit is great for ferreting out hidden information but is not so good at evaluating it objectively.

The Pluto station can intensify this aspect, increasing its power and prolonging its effects. Pluto is retrograde for about 6 months out of every year, and is reminiscent of its mythological counterpart in which Persephone goes down into the Underworld. Pluto will remain retrograde until October 4th, when it starts its 6 month period of direct motion, followed by 6 months in retrograde motion all over again.

During this time Saturn and Jupiter will also go retrograde, and the three of them will join back up in Capricorn through most of the rest of the year (until late December when Jupiter and Saturn move into Aquarius). This is a time for turning inward and developing your own internal power, rather than unleashing it on the outer world. It’s a time for concentrating your efforts toward getting in touch with your shadow side and mastering your own darker energies. It’s a time for regeneration and transformation that lasts for several months, until the cycle repeats itself.

The week ends on Sunday with the Sun conjuncting Uranus and Mercury squaring Jupiter. These are both high energy transits, with the potential for becoming combative. The Sun / Uranus conjunction emphasizes rebellion and non-conformity (among many other things) while the Mercury / Jupiter square has a penchant for grandstanding and bravado.

You may encounter aggressive or confrontational people and if so, your best bet will be to disengage. There are some much more productive ways to satisfy this volatile energy. It’s good for innovating and brainstorming and thinking outside the box, so put these transits to good use and let those who can’t fight amongst themselves.