We’ve got a lot going on this week, with a planet (Mercury) changing signs, an asteroid (Ceres) changing direction, a Full Moon and a partial lunar eclipse. 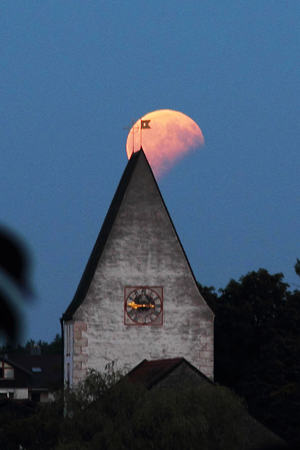 That same Capricorn Moon is Full on Tuesday, although it will be partially eclipsed. The Eclipse takes place at 9:38 pm (UT) at 24o Capricorn 04.

The July Full Moon is known as the Thunder Moon in Native American Traditions — a nod to the showers and thunderstorms that are prevalent at this time of year. It’s also sometimes called the Full Buck, Hay Moon or Guru Moon.

The Full Moon each month provides an overview of the progress you’ve made since its New Moon counterpoint earlier in the month. Seeds that were planted then will surely have sprouted; do you need to make adjustments or change your course entirely? Now is the time to think about what you’ve accomplished and where you want to go from here.

Because it’s in Capricorn, it sets the tone for looking at what’s important in your life, and for weeding out what is no longer conducive to your growth. It’s also a time for simplifying: for removing the clutter you’ve accumulated over time, or anything else that might stand in the way of reaching your goals.

Also on Tuesday, Venus inconjuncts Jupiter. This aspect can see you having a hard time establishing boundaries, especially with respect to personal indulgences. When is enough, or when is it too much? This is what you’ll have to be asking yourself during this transit.

Venus conjuncts the North Node on Wednesday, which means that it automatically opposes the South Node.This aspect can bring new people into your life who feel familiar and who can be instrumental to your evolutionary process. This aspect is karmic in nature, meaning that the people you meet during this time are here to propel you toward your destiny — and vice versa.

Your actions and interactions can have far reaching repercussions so make sure you treat the people you meet during this time (and all times) with dignity and respect. This is especially important because Venus also opposes Saturn on Wednesday (as Saturn is also conjuncting the South Node).

Here you’re pitting the planet that is associated with love, romance, beauty, harmony and personal value systems (Venus) against the planet associated with limitations, obstacles and restrictions. As oppositions are always about the need for integration, the goal is to balance out the opposing forces — in this case Venus and Saturn — rather than allowing them to fall out of sync.

This transit can manifest as relationship conflicts, as in feeling lonely, dejected or shut out. It can undermine your self confidence or see you questioning your self worth.

Fortunately Venus trines Neptune the following day (Thursday). This aspect asserts a idealized version of love, beauty, romance and compassion for others. It can bring you closer to loved ones, and see you feeling so connected to them that it’s hard to tell where you end and they begin.

This transit is excellent for tapping into your psychic abilities and can also be instrumental in creating soul connections with romantic interests. And, as Neptune is the higher octave of Venus, you may feel so in sync with those who hold a special place in your heart that you know exactly what they need to feel appreciated.

Mercury retrogrades back into Cancer on Friday, where it will remain for another three weeks. Mercury in Cancer is an inordinately sensitive archetype. It is capable of seeing all of the many facets of an object (or a person, or situation) with just a cursory glance. It’s intuitive, insightful and reflective, but it can also be moody and defensive.

You want to be aware of the tendency to distort, misinterpret or over-dramatize things with this transit. Mercury in Cancer is known for taking things too personally, reading between the lines and making mountains out of molehills. Because it’s in Cancer (where it is apt to make decisions emotionally rather than rationally) and because it’s still retrograde, you also want to hold off on making promises or signing legally binding contracts.

Mercury continues moving backwards and meets up with the Sun again (on Sunday). This transit is about developing a comfortable rapport with others. It’s about generating a meeting of the minds and communing with those who are on the same page. This is generally a very favorable aspect, but is weakened by the fact that Mercury is retrograde and is involved in an inferior conjunction to the Sun.

This exact conjunction between Sun and Mercury is referred to by classical astrologers as “cazimi” (in the heart of the Sun). Its influence is said to be heightened and energized by the Sun, but because Mercury is retrograde and essentially “hidden” by the Sun, this aspect can be somewhat problematic. The main thing to watch for is information that is hidden or lacking which can result in making ill-informed decisions.