With Saturn in Aquarius — where it remain until the end of June before it temporarily retrogrades back into Capricorn — it’s no surprise that group and social activities have been limited for many of us. As this is the only planet in an air sign this week, and since it just so happens to be the one associated with limitations and restrictions, those restrictions are likely to be even more pronounced.

Mars and Pluto is a powerful and transformation pairing. In general it’s known to be driven and self-empowered, but be careful: it can be confrontational too. Placing it in Capricorn speaks of funneling that energy into something constructive and productive. It’s about standing strong in your convictions and refusing to be bullied or pushed aside.

The Venus / Neptune sextile is excellent for tapping into your psychic abilities and can also be instrumental in creating soul connections with romantic interests. There are unconditional love aspects to the Venus / Neptune sextile but be careful: it’s also associated with escapism and self-deception, such as relationships where neither party sees the other one clearly. This transit can also manifest as co-dependency or escapism. 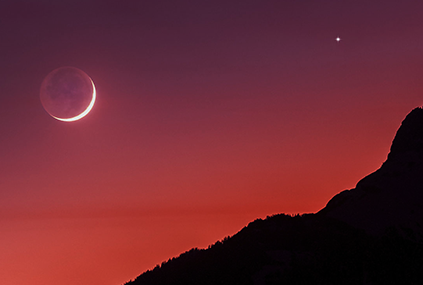 New Moons bring opportunities to plant seeds that we can then coax to maturity over the duration of the (28-day) lunar cycle. This marks a time during which the focus should be on exploring the many possibilities before you.

As Aries is the sign associated with fresh starts and new beginnings, this should be a time for taking a leap of faith and going after your heart’s desires. It’s about facing your fears, taking risks and trying something new.

As we all know, the Moon is “new” when it’s conjunct the Sun, and in this case they’re both also lined up with Chiron (with the Moon crossing it a couple hours later and the Sun crossing it the next day). The theme here (since these planets are all in the warrior-sign of Aries) is one of taking a stand, strengthening our convictions and advocating for those who can’t do it for themselves.

Mercury is at its great morning elongation on Tuesday and Venus is at its greatest evening elongation the following day (on Wednesday). What this means is that these planets are further away from the Sun (geocentrically) than they will be on any other day for the rest of the year. With Mercury on one side of the Sun and Venus on the other, these planets are operating on completely different playing fields.

Mercury is now a morning star (rising before the Sun) while Venus is an evening star (setting after the Sun). We have a very eager, inquisitive and impulsive Mercury (called Mercury Prometheus) combined with a more thoughtful cautionary Venus. As both of them are further away from the Sun than ever, the concept of social distancing is even more relevant.

On Thursday, the Sun conjuncts the Black Moon Lilith at 6° Aries 41.’ Remember that Chiron — the Wounded Healer — is already there. The Black Moon (or lunar apogee) is associated with the raw, assertive and unyielding feminine strength and power. It is a mysterious and seductive energy that exposes us to our own shadow material, as uncomfortable as that might be.

The conjunction of the Sun to this point conjures up images of women taking back their power and men honoring their inner women (or anima figures). It’s a powerful conjunction that can cut away that which is no longer conducive to our own evolutionary potential, and replace it with what is,

The Moon in Taurus on Friday brings the number of planets in earth signs back to six. That’s Mars, Jupiter and Pluto in Capricorn and Moon, Venus and Uranus in Taurus. It’s a bit of a mixed bag as far as the balance goes (between planets that are well placed and those that are not). Both the Moon and Venus are dignified in Taurus, while Mars and Jupiter are both debilitated in Capricorn.

Overall though this is a welcome astrological signature since all these earth planets are mostly in favorable aspects to one another, which can go a long ways toward getting us doing things to protect ourselves (and each other) as well as alleviating anxiety.

The Moon and Venus come together and trine Jupiter and Pluto on Saturday. Since the Moon is still relatively young, the Moon / Venus portion of this configuration will be visible for a few hours in the night sky.  And both Venus and the Moon are dignified here — Venus in the sign it rules and the Moon in its sign of exaltation.

This combination likes to surround itself with beauty and to indulge in all five senses.  And the trine to Jupiter and Pluto work very well with that energy since those planets are also in Earth signs. Ordinarily it would be a good time to take a cooking class, visit a winery, or invest in some real estate. But with so many of us holed up in our homes, we can think of other ways to actualize these transits. Redecorating, doing energy work and getting in touch with our physical bodies — through yoga, massage, Pilates, etc — are some examples.

The Venus / Pluto portion of this transit completes on Sunday, just as we wind down the week. We also have the Moon moving into Gemini — which brings the number of planets in air signs briefly to two. With Venus and Pluto emphasizing the urge to merge and the Gemini Moon seeing most of going stir crazy, this could be challenging for some. But keep in mind there are other outlets for these transits — including social outlets just a click or two away.