Things could be a bit tense at the start of this week with two stressful transits — the Sun squaring Saturn and Mercury opposite Uranus on Monday. The Sun / Saturn square may see you feeling like the Universe is raining on your parade, at least temporarily. It can indicate a sense of feeling trapped or prohibited from accomplishing your goals.

It represents limitations, obstacles and restrictions and may see you feeling like “what’s the use” with one roadblock after another standing in your way. But shake it off or ride it out — this is a short-lived transit that generally feels much heavier than it actually is.

Uranus is the higher octave of Mercury, representing brilliance and ingenuity, which is seen as a step up from Mercury’s association with more conventional thoughts and ideas. Pit them against one another — in a 180o aspect (or opposition) — and you are likely to run into trouble.

Pay attention to what you say and how you say it during this time. You don’t want to entertain someone’s attempts to rain on your parade by allowing them to push your buttons or try to pick a fight. The Mercury / Uranus opposition can be brilliant and so radical that it opens your eyes to new ways of thinking. But it can also be opinionated and argumentative, so steer clear of those who choose to take that route.

Venus moves into Scorpio — the sign of its detriment — on Tuesday. It’s considered debilitated as it’s placed here in the sign opposite it’s point of exaltation (Taurus). This placement is often misunderstood due to preconceived notions about how Venus (the planet of love, romance, affection and beauty) is supposed to behave.

There are many positive aspects with this placement, but because the dark side of Scorpio is prone to trust issues, jealousy, possessiveness and control, it can manifest as less than favorable. Still there’s more passion, depth, intensity and intimacy in this archetype than any other Venus placement, so don’t give into your fears. Let your guard down, open your heart, and be willing to take a walk on the wild side.

On Wednesday, Mars opposes Chiron. This aspect can manifest as an uncomfortable disconnect between the desire to be self-serving and the urge to self-sacrifice. On one hand (Mars) you want to assert yourself and satisfy your own needs. And on the other (Chiron) you understand that there are people suffering in the world and doing without.

You’ll have to reconcile these two competing urges; getting involved in (or heading up) a community event — where you can see yourself making a difference — is a good place to start.

Venus re-emerges as an evening star on Thursday as it slips out from under the Sun’s bright rays and becomes visible again in the night sky. From an astrological standpoint, an evening star Venus — that is Venus setting after the Sun in the hours just after dusk — is called Venus Hesperus. This is a more hesitant or cautious Venus; it can be seen as more soulful from the perspective of a more disciplined standpoint.

This is reinforced by the fact that it’s in Scorpio, the sign associated with secrecy, mystery and hidden agendas. Venus longs to be in the light but Scorpio would just as soon stay undercover. In general this re-emergence coincides with a desire to bring to light that which has been hidden (in matters of the heart).

Venus and Mars are in the unique position right now of being both debilitated and in mutual reception. Venus is not traditionally comfortable in Scorpio, and the same can be said for Mars in Libra. But the mutual reception says they’re “holding hands” and figuring out what it feels like to be in one another’s skins.

This has particular social relevance with respect to our expanding views on the traditional meanings of these two archetypes: Venus as feminine and Mars as masculine, as well as our broadening views on the concept of love (also Venus and Mars).

Speaking of Venus, it moves into its own opposition with Uranus on Saturday, just as Mercury trines the North Node. This aspect can manifest as erratic changes in your relationships, especially those that have become mired in drudgery or routine. This transit can bring people in who rock your world, only to see them exit just as quickly as they came in. It can shake up existing relationships too, leaving you feeling like the rug has been pulled out from under your feet.

If you’re dealing with ups and downs in your relationships, it’s not the time to force someone’s hand or insist on doing things your way. You’ll get much better results allowing your partner a wide berth and getting some space yourself.

The Mercury / North Node aspect is all about developing a comfortable rapport with others. It’s about generating a meeting of the minds and communing with those who are on the same page. As the North and South Nodes are always in opposition, the North Node trines Mercury at the same time it sextiles the South Node. Think of this as a relatively painless give and take, especially with the trine to Saturn still in place. 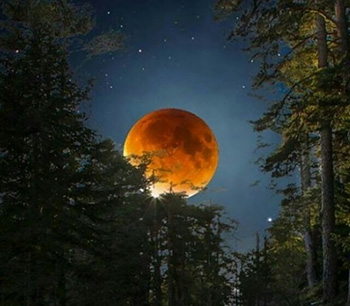 We have a Full Moon at 20o Aries 13 on Sunday. The October Full Moon is known as the Full Hunter’s Moon in Native American traditions. This was so named because it occurs during the time when the indigenous people starting hunting, in preparation for winter.

The Full Moon each month provides an overview of the progress you’ve made since its New Moon counterpoint (this one, back in September).

Seeds that were planted then will surely have sprouted; and the question is: do you need to make adjustments or change your course entirely? Now is the time to think about what you’ve accomplished and where you want to go from here.

The Aries Full Moon emphasizes the Aries / Libra polarity’s natural association with relationships of all types, with Aries representing “the Self” and Libra representing “the Other.” The theme here is figuring out where certain people fit in your life without focusing so much on one type of relationship so that you invalidate the other.

Full Moons are always comprised of a Sun and Moon opposition, and in this case Pluto squares them both. This is what’s known as a cardinal t-square with Pluto at the apex. This one can be divisive and explosive at the same time. It’s a highly volatile and antagonistic transit that can see people lashing out at one another and drawing distinct lines in the sand. We’ll probably see this energy expressing itself physically (and certainly politically) over the next several weeks.

Jupiter also trines the Sun on Sunday. ending the week on a more fortuitous note. This aspect brings the planet that rules growth, expansion and personal evolution into harmony with the Self. It represents feeling good about yourself. Feeling upbeat, optimistic, generous and carefree. It can manifest as expecting only the best and having the Universe respond in kind.