We start this week on Monday, with a semi-sextile between Uranus and Chiron. This transit has been moving in and out of orb for several months. It emphasizes the focus on social activism and humanitarian impulses. It bridges the gap between recognizing social injustices (Uranus) and taking steps to heal them (Chiron).

Also on Monday, we have both Mars and Venus getting ready to leave their respective signs and move into the next. Mars is not a happy camper at this time: it’s void of course, at an anaretic (29th) degree and debilitated by sign (Cancer, the sign of its Fall). At its worst, Mars in Cancer can be irritable, moody, defensive and passive aggressive. But at its best, it is a champion for the underdog; it can act as a guardian angel, taking up the fight for those who are weak or vulnerable.

Gemini is Venus’s esoteric ruler, as the catalyst through which the concept of “Love” first emerges — through connecting, interacting and most importantly communicating with others. It is curious, whimsical and spontaneous. It’s a feminine planet in a dual sign, which means it can also be restless, changeable and fickle in the relationship department.

Mars leaves Cancer behind and moves into Leo just after midnight on Tuesday. This is a much more comfortable placement for Mars as its natural orientation toward action, assertion and drive is much more aligned with the Leo fire sign energy than the Cancer water sign energy, which is much more passive, emotional and indirect.

Mars in Leo is regal and dignified. It is dynamic and expressive. It’s a confidence-builder and attention grabber. Where is this transit taking place in your natal chart? This will tell you where you want to put your best foot forward over the next 6 weeks, and where your ego, pride and issues related to self-respect are likely to be triggered.

Mars transits bring action and energy to the area of a natal chart where the transit occurs. It also affects planets in a natal chart that it forms aspects to, which are in turn influenced by the sign placement (in this case Aquarius) as well as the house Mars is placed in and rules in the natal chart.Mars will remain in Leo for about six weeks, and will form several aspects (most notably a conjunction to Mercury, a square to Uranus and a transit over the January 21st eclipse point) in the coming days. 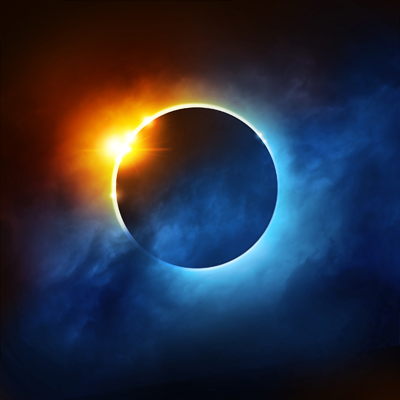 Also on Tuesday, there’s a total Solar Eclipse at 10º Cancer 07. As this is a New Moon eclipse, both the Sun and Moon are occupying that degree.

The New Moon each month brings opportunities to start anew, and this month with it falling in Cancer — the sign associated with home, family, security needs and roots — the emphasis is on relationships with those who are nearest and dearest to our hearts.

This eclipse creates a shift in consciousness related to these areas as well as the house it falls in your natal chart. Its effects can last up to six months, but will be strongest over the next two weeks.

The Solar Eclipse brings to light what’s been obscured by our emotions — our innermost longings and desires — as opposed to what might be best for us. It causes us to see things in a whole new light, bringing clarity to even our most heart-wrenching decisions.

This can be a wakeup call if you’ve been walking around in a daze, but will be a welcome one in the long-run. Eclipses tend to force you to “get clear” about your situation and make the necessary changes, even if those changes are ones you’ve been dreading in the past. They can also bring past emotional issues to light, forcing you to confront them head on.

On Wednesday,Venus leaves Gemini behind and moves into Cancer, where it will remain until July 28th. Venus is Cancer is sensitive, loving and affectionate. It’s a feminine planet in a feminine sign, and thus oriented toward nurturing and caring for others. It’s sentimental and romantic, but can also be moody, clingy and needy.

While Venus is in Cancer, it’s a good time to focus on your relationships with family members and to heal any rifts that have developed with them. It’s also a good time for entertaining in your home or for remodeling / renovating. Family reunions, open-houses, birthday celebrations, baby showers, etc. are other ideas.

Thursday’s Moon — still in Cancer — will be void of course until around 4 in the morning, when it joins Mercury and Mars in Leo. This combination is passionate, driven and dynamic. It’s full of anticipation and enthusiasm; It’s on its toes, raring to go and ready for anything. This would be a good time to put yourself out there and express your full potential without fear.

The Moon in Leo is in mutual reception with the Sun in Cancer, as they are in one another’s home signs at this time. It should make for a more comfortable and relaxed home environment, but remember that Moon in Leo wants to be seen! So rather than staying home on this day, see what you can do to put yourself out there and show the rest of the world what you are made of.

On Friday, Mercury goes stationary — in preparation for its change in direction (turning retrograde) on July 8th. The stationary point (less than one degree away from the exact point or retrogradation) marks the onset of some of the more intense features of the planet’s “backwards” motion, in this case it’s Mercury so we’re looking at issues with communications and communications devices (phones, computers, television, the mail system, etc).

Also on Friday, Venus and Mars (the traditional “love” planets) are involved in a semi-sextile. As semi-sextiles act as instruments of transition from one sign archetype to the next, this one may see you changing direction in your relationships with others or inviting new friends into your social circle.

In general this transit is about being in touch with your feelings enough to put them into words, and it’s about wanting to express what you feel openly and honestly. As Mercury is stationary (and getting ready to go retrograde) at this time, it can also see you  taking a trip down memory lane, or feeling the urge to reach out and touch someone from your past.