We start this week with Neptune trining the North Node (and sextiling the South Node) on Monday. This transit can bring people in that you’re working through past-life karma with (South Node) or creating new karma with (North Node). Of course these are often one and the same.

Pay attention to new people coming in during this time, as well as interactions that trigger you emotionally. These are harmonious aspects (trine and sextile) that should make for pleasant interactions with others, as well as opportunities to work together.

The emphasis is on people entering (and exiting) your life that you might have some type of strong karmic link to. There are elements of fate associated with this aspect. Relationships that start or end during this transit are karmic in nature, so it’s important to treat them as sacred. 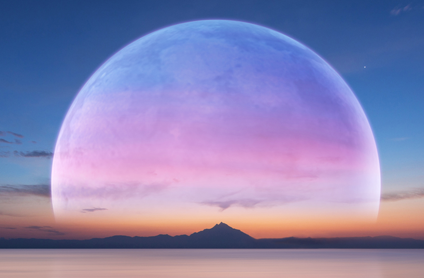 Also on Monday, at 9:30 am (UT) we have a Full Moon at 25o Sagittarius 53. The June Full Moon is called the Strawberry Full Moon, referring to the time for harvesting ripe strawberries. It’s also sometimes known as the Full Rose, Full Mead or Full Honey Moon.

As Full Moons are said to shine a spotlight on areas in your chart that are affected (by house position and contacts to other planets) you might look to your own natal chart (or have an astrologer look at your chart for you) to see where this will play out for you.

In general, the Full Moon provides an overview of the progress you’ve made since its New Moon counterpoint earlier in the month. Seeds that were planted then will surely have sprouted; do you need to make adjustments or change your course entirely? Now is the time to think about what you’ve accomplished and where you want to go from here.

Mercury conjuncts Mars on Tuesday, while Saturn sextiles Neptune. With respect to the Mercury / Mars aspect, emotions are likely to be heightened, as are impatience and impulsivity. You want to think before you speak, especially if speaking turns into lashing out at others. Remember that this transit is fleeting and will pass in a matter of days, so think about what might be said that you won’t be able to take back later.

The Mercury and Mars conjunction can also manifest as carelessness or recklessness, especially as Mars is debilitated in Cancer. It’s an accident-prone transit which can be minor (small cuts, burns, bruises, etc.) or major (automobile accidents, fires and physical violence). Do what you can to release any tension in the safety of your home — or gym — so that it doesn’t come at you from the outside.

Fortunately the Saturn / Neptune sextile is there to ease some of the tension and frustration that Mercury / Mars can bring. But both of these planets lean toward pensiveness and melancholy, so even with this relatively benign aspect (and the fact that both planets are dignified by sign), we might experience a period of wistful reminiscing and longing for the past.

Saturn and Neptune work well together when involved in harmonious aspect — like the 60o sextile. They can be meditative and reflective, although not necessarily inspired. It’s going to be important to look at the glass as half full rather than half empty during this time, and to find something motivates us toward action. Otherwise the potential for wallowing in misery is strong.

The Mercury / Mars conjunction moves up to oppose Pluto over the next few days, with Mercury opposing Pluto on Wednesday and Mars following suit the following day. In the middle of all this, the Moon joins in — conjuncting Pluto and opposing Mercury and Mars.

This set of transits can be extremely volatile, with the Mercury / Pluto / Moon aspect bringing suspicions and trust issues to the forefront. Mercury in Cancer is hypersensitive to begin with and the opposition to Pluto makes it hypervigilant. The Mercury / Pluto opposition can be willful and rebellious, so be mindful of loved ones’ need to be themselves. Power struggles, harsh words and trust issues are all indicated here. This is not the time to try to force someone into a specific role or exert your own expectations on others.

Thursday’s Mars / Pluto opposition can further exacerbate tensions, increasing the potential for tempers to flair and complications to arise. This is a volatile aspect that can supercharge relationship conflicts. Egos are on the line here and you may find yourself embroiled in a battle that you have no idea how it started.

This is set of aspects is in play for several days, but it’s not permanent. Keep that in mind because other transits start to take center stage in the following days, beginning with Neptune turning stationary retrograde on Friday. Neptune is retrograde for about 5 months of every year, moving backward through the zodiac until it turns direct. This year that happens on November 28th, although it won’t cross its shadow point (the degree at which is goes retrograde) until March of 2020.

Neptune is at home in Pisces, and when it’s retrograde it can bring you one step closer to Nirvana. It opens up your psychic pathways and makes it easier for you access the collective unconscious. It is sensitive, compassionate, idealistic and altruistic. It can also be unrealistic and delusional.

When we think of the Sun, we think of warmth, light and life. It warms our spirits as well as our bodies; it brightens our moods as well as the outside world, and it brings life to our dreams and goals as well as to every living thing on the planet. But put it in sensitive, loving, romantic Cancer and you know emotions are going to come into play. This is especially pronounced with the Neptune in Pisces retrograde that is happening at the same time.

We end the week on Sunday. with Saturn completing its conjunction to the South Node (an aspect that has been in play for several weeks). As the Moon’s Nodes are always naturally in polarity — and thus always in opposition to one another — Saturn simultaneously opposes the North Node during this time as well.

This is can be a particularly meaningful transit — personally and universally — as Saturn and the Nodes are tied to both the passage of time and the concept of fate. You want to pay attention to people coming into your life during this time as they’re likely to play a role in facilitating your growth.

You also want to be mindful of your actions (and reactions) regarding love interests and relationship partners. Saturn may force you to re-evaluate your needs and expectations, as it can manifest as a series of roadblocks that seem impossible to overcome. The Nodes are tied to karma — both the reaping and the sowing of karma — which makes having an awareness of your own contributions so much more important.

At the same time, also on Sunday, Venus opposes Jupiter. This aspect may see you thinking about what’s wrong in your relationships — whether that means you aren’t in one and are feeling lonely, or you are in one that has become unfulfilling. It can see you (or a love interest) feeling ready to throw in the towel and walk away.

But there are benefits to this transit as well. As Jupiter and Venus are both dignified by sign (with Jupiter in Sagittarius — the sign it rules — and Venus in Gemini — the sign of its esoteric rulership) there’s a call to balance out your differences (the opposition) and find a middle ground. This is a time for coming together not pulling apart, so don’t act rashly.